Summary The table element in HTML is not always treated as a table by assistive technology. Historically HTML tables have been misused for layout. Before the introduction of CSS Grid in 2017 there was no reliable CSS method to layout HTML on a grid, so tables were often used instead (and some legacy browsers still don't support CSS Grid). The means there are two types of table: Data tables containing data where rows and columns have meaning (e.

Often scanning a large site finds a large number of issues. What's the best way to fix these? Fix template issues Issues in page templates are often repeated on every page on a site, so fixing these has the maximum benefit. Template issues often affect site navigation, so even fixing minor issues has positive impact for users trying to navigate around the site. It's not uncommon for template issues to account for 50% of the issues by volume, so fixing a single page template can resolve half of the issues found.

Our contingency plans have been activated to deal with the Coronavirus outbreak. Response times may be affected as noted below: Our main office is closed until June 2020 and staff are working remotely based on government advice Phones have been routed to a 24x7 answering service Some support issues requiring specific software or hardware may much take longer to diagnose

This post is a compilation of disability statistics from government agencies and researchers in the US, UK and Canada. The statistics shown have most impact on website use, and help assess the impact of accessibility problems, in terms of numbers of people affected, and likely commercial impact.

As part of the online demo at try.powermapper.com we collect summary statistics about pages scanned by our service. One interesting statistic covers versions of HTML and XHTML in common use. As of March 2019: 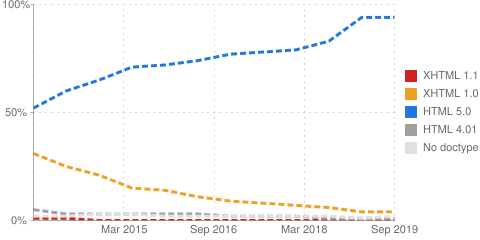 This posting summarizes some detailed research into the state of government accessibility standards around the world, as of March 2016. Usually these evolve fairly slowly, although the Jodhan vs. Attorney General of Canada case may change that (governments don't like being successfully sued by their citizens).

Waiting for Section 508: a tragicomedy in 10 acts

Update - January 2017 On January 5th, 2017 the US Access Board announced that the Office of Management and Budget (OMB) cleared the Section 508 Refresh, with the compliance deadline set for January 18, 2018. Introduction Welcome to a series of articles on accessibility laws, standards, and statistics around the globe. These articles will help web professionals to understand accessibility legislation within a wider policy context. Every accessibility law has both strengths and weaknesses which can offer valuable lessons for other countries and systems.

Accessibility professionals can look forward to the passage of two European laws pertaining to web accessibility: the public sector accessibility directive and the European Accessibility Act. Both of these laws will bring much-needed clarity to the drive towards better accessibility in Europe. There are, however, a number of issues which will need to be resolved before the laws can be allowed to achieve their full potential.

This article explores both sides of a longstanding debate: should screen readers be detectable in analytics? It’s an issue that pits accessibility against privacy, with legal complications thrown in for fun. When these aspects are taken into consideration, screen reader detection emerges as a technique which carries serious technical, ethical and privacy risks. Analytics Designers and developers live for analytics data. We can spend hours digging into fascinating insights on everything from shopping cart abandonment to social media conversions to browser use.

Table cell header calculation for AT

Summary This post describes how table cell headers for screen-readers are calculated. TH with SCOPE=ROW or SCOPE=COL is unambiguous and widely supported TD with SCOPE is non-conforming in HTML 5, and is ignored as a header on some browsers (works in Apple WebKit, but ignored in Chromium WebKit). On tables with headers in the top row, or first column, TH without SCOPE usually works. TD HEADERS is problematic because it assumes a single list of headers for each cell, but accessibility APIs expose row and column headers as separate properties On any other table, TH without SCOPE produces wildly varying results.

PowerMapper is now available for macOS, providing one-click site mapping for the Mac. The Mac version has the same site map styles as the Windows version, but with an easier to use interface. This release is functionally identical to PowerMapper 5.18 for Windows, with the exception of some map customization options. The Desktop Suite (which bundles PowerMapper and SortSite) is now also available for Macintosh. You can download a free 30 day trial of PowerMapper.

Accessibility, search engines and social media: how they overlap

Ever been wondered why there's a lot of conflicting advice about longest page title allowed in search results pages (SERPS)? The short answer is different search engines have different limits and these limits keep changing. The current official guidelines, as of April 2013, are: W3C recommends a maximum of 64 characters for page titles. Bing recommends a title around 65 characters long. Yahoo used to recommend a maximum title length of 67 characters, but this advice is now obsolete since Bing now supplies Yahoo's search results.

After 4 years of development HTML 5.0 finally exited draft status and became a W3 Candidate Recommendation on Dec 17, 2012. HTML 5 will now go through the final stages of the W3 standardization process before becoming a full Recommendation in 2014 (the final published standard). The only changes now to HTML 5.0 will be bug fixes, fixing typos and the possible removal of "at risk" features. New features will be added to the HTML 5.

SortSite 5 is now generally available with over 700 quality checkpoints. New features in version 5 include: Record and replay form actions (Professional version only) Enhanced browser compatibility checks allowing ability to choose which browsers to check Analyze and check changes made to pages by JavaScript ARIA support HTML5 validation Performance improvements - twice as fast scanning some sites Record form actions SortSite Professional allows you to record form actions and replay them during scans to check the results of the form action.

The winter festival has just finished in Edinburgh. For 6 weeks, from the start of December to the start of January, the city centre streets come alive day and night with:

This post follows on from the one on Disability Statistics, and shows how the most common disabilities affect website use.

Well, it’s that time of year again. While I consider myself one of life’s formidably organised Christmas present buyers (I started in August) I seem to fall sadly short when it comes to finding the time to write and post my Christmas cards. I know that to many, card writing seems an outmoded way of sending Christmas greetings, but for many of my ageing relatives, some of whom now live alone, a hand written card arriving in the mail is still much appreciated.

Having something to say beats slick presentation

Today is World Stroke Day, which aims to raise awareness of the condition. Earlier this week I saw a conference keynote speech by Clayton Christensen, author of The Innovators Dilemma and a Professor at Harvard Business School. He introduced himself by apologizing for hesitating while speaking because he'd suffered a stroke a few months earlier. In spite of this he was an engaging speaker - much better than the other professional conference speakers.

The Design for All Research Group at Middlesex University have produced a report called Declaring conformance on web accessibility asking the question: can website accessibility declarations be trusted? Sadly the conclusion was no, for both self-declared and third-party certifications, confirming the findings of earlier studies. Using a sample of 100 European government and commercial sites claiming accessibility standards conformance, more than 95% were found to have accessibility issues. The study used our automated tool, SortSite, in conjunction with manual testing performed by the accessibility group at the Shaw Trust (see the report for details on methodology).

A few days ago I attended a presentation given by some UK Government departments - the main topic was providing equality of access to government contracts. There was the usual torrent of PowerPoint slides filled with facts, figures and addresses of websites which publish government contracts.  At the end of the presentations the question and answer session started: Chief Official: "Does anyone have any questions?" Lady in Audience: "Will any of the slides be available after the meeting?

This diagram shows how web standards have developed since 1994. Originally HTML and related standards were discussed and agreed by a small group of interested parties on a mailing list. Later the W3 was formed, and it put in place increasingly rigorous processes, with increasing amounts of public consultation. While solid process and consultation is a good thing, one striking point is how long it now takes to get W3 standards from Draft to Recommendation status.

Today is World Usability Day, so I'm going to talk about some famous usability disasters. As web developers we're lucky - our usability shortcomings almost never kill anyone. Some famous examples of fatal usability problems include: The Airbus 320 crash in Jan 1992 was partly caused by a mode switch in the wrong position. The mode switch changed the meaning of descent rate numbers entered into the autopilot and was toggled by a small switch in a large bank of other switches.

The HTML 4.01 standard was introduced in 1999, but 11 years later, no major vendor fully implements it.

Controversial, perhaps, but also true. A lot of flak is rightly directed at Internet Explorer's lack of standards support, but the other browser vendors aren't blameless either. Here's a partial list of some HTML 4.01 features not supported in Chrome, Firefox, Internet Explorer or Opera.

Pam is responsible for PowerMapper sales and marketing. Prior to PowerMapper Software, Pamela held senior positions in the beverage and tourism industries. She holds a BA (Hons) in Design from Duncan of Jordanstone College of Art and Design.

Mark is CEO of PowerMapper Software, and has over 25 years experience in the software industry. He previously held senior positions with Electrum, Panasonic, and Office Workstations Limited. He holds a BSc (Hons) in Computer Science from The University of Dundee.

Heather Burns is a digital law specialist in Glasgow, Scotland. Her focus is researching, writing, and speaking about internet laws and policies which impact the professions of web design and development. She has been designing web sites since 1997 and has been a professional web designer since 2007.

We've just moved to new offices in Edinburgh in the rather stunning St Andrew Square. We spent a long time choosing offices since they had to match quite strict sustainability criteria: Easy access to public transport (the train station is 3 minutes walk, the bus station is the other side of the square, and the new tram system will run through the square) Accessible to wheelchair and low vision users (quite hard to find in Edinburgh which is full of very old buildings that are hard to make accessible) Energy efficient with recycling facilities (the office has recycling bins everywhere, with special bins for toner cartridges which go to a recycling charity) Plenty of space for future expansion The new offices fit the bill perfectly, with the bonus of a great view across to Edinburgh Castle.